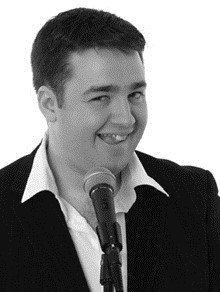 Jason began his career at a comedy club in Manchester and after his first stand-up show he quickly became the North West Comedian of the Year.

Jason soon became recognised as a talented stand-up act and was in demand for television programmes and on the radio.

He presented a breakfast show on Xfm Radio Manchester until 2008 and also became a team captain on popular game show ‘8 Out of 10 Cats’ between 2007 and 2010. He has also been a presenter on ‘The One Show’ and the ITV comedy reality TV show ‘Show Me the Funny’.

As a stand-up act Jason has been a huge success and he has been nominated for the Perrier Award and a Semi Finalist in the BBC Comedy Awards. His show ‘Turning into My Dad’ toured in 2010, the same year he was involved in the Channel 4 Comedy Gala. In 2013 he toured with his new show called ‘First World Problems’.

Contact us today for further information on Jason Manford or to make a booking.