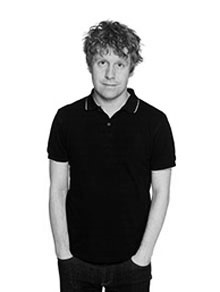 Josh Widdicombe made his debut on the comedy scene in the final of the prestigious ‘So You Think You’re Funny’ at the Edinburgh Fringe in 2008, and has never looked back.

In 2013 Josh’s show ‘Incidentally…’ kicked off at the Edinburgh Fringe, and was then taken to over 25 venues around the UK, including the Hammersmith Apollo where it was recorded for a DVD.

His intelligent humour and talent for engaging the crowd has garnered him an Edinburgh Comedy Awards Best Newcomer nominee, with regular appearances on BBC1’s ‘Mock The Week’, Channel 4’s ‘8 Out Of 10 Cats’, and Channel 4’s ‘Comedy Gala in aid of Great Ormond Street Hospital’ cementing his status.

Between 2013 and 2015, Josh hosted the Saturday mid-morning slot on XFM, regularly featuring in the iTunes Podcast Top 10.

Since 2012, Josh has co-presented all seven series of ‘The Last Leg’ with Adam Hills and Alex Brooker. In 2015, Josh also starred as a regular contestant in the Dave game show ‘Taskmaster’.

Contact us today for further information on Josh Widdicombe or to make a booking.