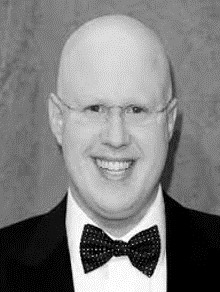 Matt Lucas and David Walliams brought the comedy series ‘Little Britain’ to our screens in 2003 and it is now one of the best known and most loved comedy series of our time.

Matt was talent spotted by Bob Mortimer and Vic Reeves at the Edinburgh Festival and went on to appear in their show, 'Shooting Stars', where he played George Dawes. He has since appeared in other major television work with them including 'The Smell Of Reeves and Mortimer', 'Bang Bang It's Reeves and Mortimer' and 'Randall and Hopkirk'.

On 3 October 2010, Matt played Thénardier in the 25th Anniversary Concerts of ‘Les Misérables’, at the O2 Arena in London. A year later, from 23 June to 10 September 2011, he reprised the role at The Queen's Theatre, in the West End.

Contact us today for further information on Matt Lucas or to make a booking.