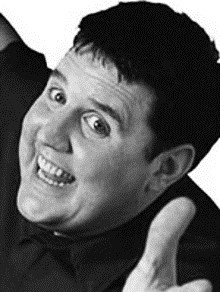 Within a year of launching himself onto the stand up circuit, Peter won the 1997 Channel 4 'So You Think You're Funny?' competition. From there his rise to the top was rapid.

It was at this time that production also began on Phoenix Nights, which was to see him achieve critical acclaim as well as mainstream success. In 2004, Peter followed the success with ‘Max and Paddy's Road to Nowhere’, a spin-off of Phoenix Nights. In 2007, Peter followed this with a re-release of "I'm Gonna Be (500 Miles)", originally by The Proclaimers, for Comic Relief.

In 2008, Kay returned to TV after an absence four years with the BAFTA-winning satire of reality talent shows, ‘Peter Kay's Britain's Got the Pop Factor... and Possibly a New Celebrity Jesus Christ Soapstar Superstar Strictly on Ice’, which he co-wrote with Paul Coleman.

In November 2009 Peter announced a return to stand-up with four dates at the Manchester Arena the following April with a show entitled "The Tour that Doesn't Tour Tour". Demand for tickets caused him to announce soon after that the show would be toured. In January 2012, the tour entered the Guinness Book of World Records as the most successful stand-up comedy tour of all time, playing to a total of 1.2 million people.

Contact us today for further information on Peter Kay or to make a booking.