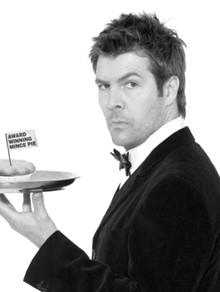 Rhod Gilbert regularly headlines in venues across the country and comedy festivals around the world and has very quickly emerged as one of the most exciting and original talents on the UK and international comedy scene.

Since 2005 he has toured six different stand up shows, with three of them being released on DVD; the most recent was called ‘The Man with the Flaming Battenberg Tattoo’.

Rhod has appeared three times on the BBC Two panel show Mock the Week, and guest presented two episodes of ‘Never Mind the Buzzcocks’ before becoming the permanent presenter.

Contact us today for further information on Rhod Gilbert or to make a booking.