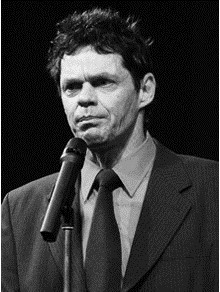 Perrier Award winner, TV star and supreme stand-up, Rich Hall is one of the most successful comedians of this generation.

From hurricane namer for the United States Meteorological Service to massive international comedy star, Rich Hall is master of ‘absurdist irony’ and his appearance on the ‘David Letterman Show’ garnered him an Emmy award.

He has also been a regular on the international comedy scene including regular appearances at the Edinburgh Festival, and every major comedy club in the UK.

In 1998 redneck jailbird Otis Lee Crenshaw was born – married seven times, each time to a woman named Brenda, his whisky-soaked blues, sung by his creator Rich Hall, have graced the stage at every international comedy festival in consistently sell-out shows.

A monthly slot in London’s Comedy Store proved that Rich had broken through the ranks of jobbing comedians, to establish himself as one of the world’s funniest men.

Contact us today for further information on Rich Hall or to make a booking.