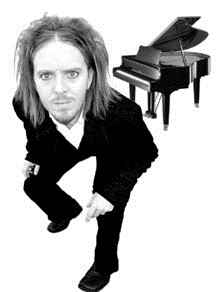 Tim Minchin is an award-winning comedian, songwriter, singer and pianist. Renowned for his sharp lyrical observations and extraordinary musical talents.

He has become extremely popular in the corporate sector, particularly for his ability to create tailor-made songs for clients.

Tim’s brand of dark comedic cabaret has received increasing critical and public acclaim. His show ‘Dark Side’ won the 2005 Perrier Best Newcomer Award at the Edinburgh Fringe Festival, and the Festival Directors Award at the Melbourne International Comedy Festival.

Tim went on to perform ‘Dark Side’ at the Soho Theare and the Lyric Theatre in London’s West End, and also appeared on a bill with Mariah Carey and Westlife at the Royal Albert Hall.

More recently, he co-wrote ‘Matilda the Musical’—an Olivier Award-winning musical version of Roald Dahl's novel Matilda—with Dennis Kelly and the Royal Shakespeare Company, which is produced by the RSC. It began its West End run at the Cambridge Theatre on 25 October 2011 to great critical acclaim.

In 2015, it was announced he had teamed up again with the creative team from Matilda to write the music and lyrics for the new stage musical ‘Groundhog Day’. The musical is scheduled to premiere at The Old Vic in 2016, before transferring to Broadway.

Contact us today for further information on Tim Minchin or to make a booking.